The prognosis of children with diffuse intrinsic pontine glioma (DIPG) remains dismal despite radio- and chemotherapy or molecular-targeted therapy. Immunotherapy is a powerful and promising approach for improving the overall survival (OS) of children with DIPG. A retrospective analysis for feasibility, immune responsiveness, and OS was performed on 41 children treated in compassionate use with multimodal therapy consisting of Newcastle disease virus, hyperthermia, and autologous dendritic cell vaccines as part of an individualized combinatorial treatment approach for DIPG patients. Patients were treated at diagnosis (n = 28) or at the time of progression (n = 13). In the case of 16 patients, histone H3K27M mutation was confirmed by analysis of biopsy (n = 9) or liquid biopsy (n = 9) specimens. PDL1 mRNA expression was detected in circulating tumor cells of ten patients at diagnosis. Multimodal immunotherapy was feasible as scheduled, until progression, in all patients without major toxicity. When immunotherapy was part of primary treatment, median PFS and OS were 8.4 m and 14.4 m from the time of diagnosis, respectively, with a 2-year OS of 10.7%. When immunotherapy was given at the time of progression, median PFS and OS were 6.5 m and 9.1 m, respectively. A longer OS was associated with a Th1 shift and rise in PanTum Detect test scores. Multimodal immunotherapy is feasible without major toxicity, and warrants further investigation as part of a combinatorial treatment approach for children diagnosed with DIPG. 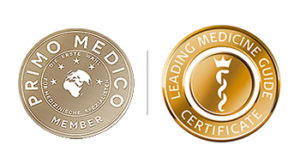